My dogs are imports and I prefer the FCI standard not the changed USA one.

The Irish Red and White Setter probably came to its own at the end of the 17th century.

It is not well known outside of Ireland that there are two breeds of Irish Setters, but is fairly certain, that the Red and White Setter is the older of the two, and that judicious selective breeding evolved the solid red colour. When Irish Setters came to the show benches, just past the middle of the 19th century, there was a good deal of confusion about their proper colour. By the end of the 19th century, the Red Setter had virtually eclipsed the Red and White, which became so rare, that they were thought to be extinct. During the 1920s, efforts were made to revive the breed. By 1944, the breed had re-established itself well enough to have a club of its own, and today it can be seen in healthy numbers at Irish shows and Field Trials. The present Club the Irish Red & White Setter Field & Show Society was formed in 1981 and through its endeavors and direction the breed is now well established nationally and internationally. The Irish Red & White Setter competes successfully in Field Trials against the other pointing breeds and there are now quite a number of Field Trial Champions and Show Champions. 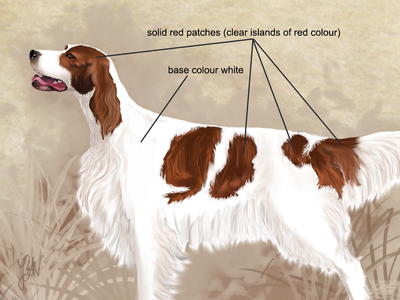